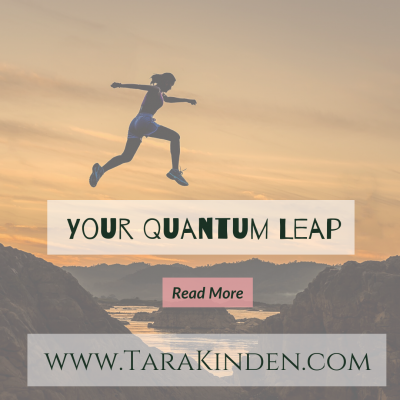 What is a Quantum Leap and how could it be the best thing you ever gift yourself.

Quantum Leap Definition: an abrupt transition of a system described by quantum mechanics from one of its discrete states to another, as the fall of an electron in an atom to an orbit of lower energy. Any sudden and significant change, advance, or increase.

Let’s break this down.

Paradigm Definition: A paradigm is a standard, perspective, or set of ideas. A paradigm is a way of looking at something. The word paradigm comes up a lot in the academic, scientific, and business worlds. … When you change paradigms, you’re changing how you think about something.

Programming from your parents, education system, social media, news etc. basically anything that has ever influenced you.  And depending on the openness in your Human Design Chart you may not only have received that information but are amplifying it and it’s not even yours.

So why am I sharing this with you.

Because here’s something very interesting I’ve been playing with over the last 3 weeks or so as I’ve deepened my own study around subconscious reprogramming, the way the mind works and healing the body on an energetic level.

What I’ve learned is that if we can change the way we “think”, we can access and clear not only the physical, emotional + spiritual traumas of the body.  We can actually change the energetic frequency + old paradigms we’ve been holding onto.  So that we can then experience the magnificence of a quantum leap!

Some of us come equipped with the sheer WILL power to change but it’s always done with force and it never seems to stick.  Because we are always falling back to what we believe to be true about ourselves (our worth) not even consciously aware of those beliefs and when we acquired them.

So to have the lasting change or quantum leap a reprogramming of sorts needs to occur in the mind and in the energetic body (vibrationally).  It’s about holding a completely new image of self and then backing it up with some subtle body therapies  (as the bandaid) to hold it all in place until it sticks!

Taking the sheer will and force out of the equation all together.

I’ve been speaking about this since last year but now understand it and teach it with an entirely new level of conscious awareness.  I remember saying on a podcast episode that we all fall back to the systems we have in place.    That we can shoot for the goal and achieve it but if we don’t change the system permanently we will easily default back down the well worn path. This is true and in order to create a new paradigm we need to be brave enough to forge a new pathway and change the beliefs we hold about our worth.

I’m here to wake women up to their wisdom, tap back into their intuition and fully accept their lovability.  This work is the privilege of my lifetime and I’m so grateful for this awakening.

If you ready to wake up join me in this ground breaking new program called Awakening Your Wisdom.  Learn more here – https://bit.ly/AwakeningYourWisdom

Keep an eye on your inbox for all the juicy goodness heading your way.  Please visit www.TaraKinden.com/frequencysupports for some fabulous free meditations, guidebooks + journal prompts to support your hyperspeed transformation.

Things have definitely been heating up over here.

This is my first Masterclass of 2023 and it’s go

It isn't luck that keeps them coming back. I hones